During the 1970s, Frederick Sanger developed a new technique allowing the base sequence of DNA to be determined. The design of his method is still very popular today. Sanger employed dideoxynucleic acids, ddNTPs, in addition to deoxynucleic acids together in the amplification of DNA during the Polymerase Chain Reaction (PCR). Instead of amplifying a section of DNA, the ddNTPS would cause amplification to terminate in a random number of amplified products. The ddNTPs were also radioactively labeled for detection. The end result of the Sanger chemistry would be a series of new DNA products with sizes increasing by a single base.

The PCR products were separated on a medium, polyacrylamide gel, with smaller products migrating faster than the larger products. The end result appeared like a ladder when detected.

The basics of the chemistry remain the same today. What has changed in Sanger sequencing is the method of separating the products and detection.

Original Base Labels were Radioactive

Before development of the fluorophore, Sanger labeled ddNTPs with a radioactive tag on the 5 prime end of the base. Because there was no method that could identify the different bases, a sample was amplified by PCR in four separate tubes. Each tube represented one of the four bases making up DNA. The amplified products were loaded separately into four lanes and allowed to migrate. Once complete, the gel was photographed by x-ray to view the result as shown in figure 1. 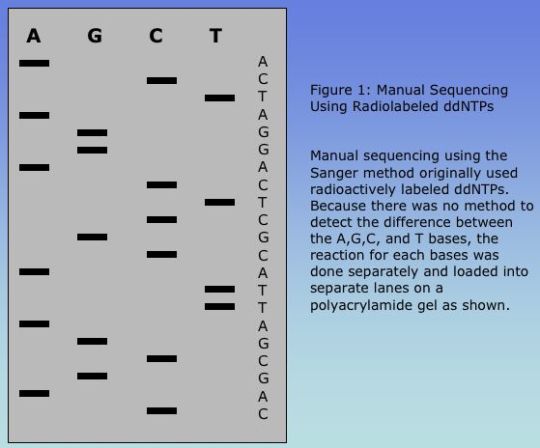 Automation replaced the manual sequencing method with development of fluorescent labeled ddNTPs. Slab gels were still poured. However, all four bases were combined into a single reaction and loaded together. Samples would electrophorese and separate in the gel. Once the amplified products reached a region on the bottom of the plates, a laser would excite the fluorescent labels and color would be recorded by camera. Resulting images were collected by computer and analyzed as shown in figure 2.

Development of the automated chemistry allowed sequencing to be performed much faster. First, one lane on the gel was required for each sample. Second, sequence was recorded as electrophoresis was performed. The smaller more quickly migrating bands could be run completely through the gel as larger bands were recorded. Therefore more bases could be determined.

A significant amount of sequencing was performed using automated slab gel sequencing. But researchers still needed to pour plates and electrophoresis was performed for 12 hours or longer.

Capillary development occurred during the 1990s beginning with a single capillary machine, the ABI 310. The new technology eliminated any need for pouring gels. Instead, semi-liquid polymer was injected into the capillary before each run as shown in figure 3. Individual runs reduced the length of time required for electrophoresis to less than 3 hours.

The automated process changed very little from slab gel machines to capillary. But capillary sequencing was faster and more sensitive. It required much less DNA added to the PCR amplification. Better chemistries were developed in conjunction with automated sequencing. Capillary sequencers today characteristically perform 4 to 96 samples in a single run. The runs generally require 2 to 2 ½ hours of electrophoresis. Automated injection of samples allows hands-off operation through multiple sets of samples.

reprint for this article in pdf format

Metagenomics: A New Field of Genetics that Focuses on the Community Genome